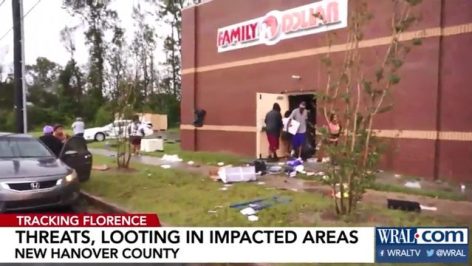 NEWS ALERT – Moments ago officers arrested five individuals who broke in and looted the Dollar General at 5th & Dawson Streets. Charges are pending and those details will be released as they become available. (link)

Said to be “capitalizing on chaos,” the looters made off with what, exactly?  How does anyone capitalize on anything by looting a dollar store?  By definition- it is the last place you would want to ‘loot.  How do you know this?  Because Dollar General only stocks basic supplies.  Dollar General doesn’t sell high-end electronics- or high-end anything.

By definition- a dollar store is the best place to get basic supplies without risking a felony theft charge in the process. In fact, maybe these residents looted dollar stores for this very reason- they didn’t want to risk the perception that they were looting. Nice try but it didn’t work.  It’s the elites who write same the script for more than 190 local TV stations across the country.  And that script for the last two days and said- these savages are looting and capitalizing on chaos.

But in reality- these aren’t criminals, these are people trying to get basic supplies such as food, water, diapers or batteries?  It’s not possible to do otherwise in one of these stores- even Media Elites ought to know this.  Should we really be arresting people for taking supplies from a Dollar General after a hurricane?

The reality of what’s going on here doesn’t fit into the televised narrative of the savage looters who “capitalize on chaos.”  Let’s challenge news stations to get the full story here.  Were these residents taking critical supplies because their communities was shattered, roads flooded?  My guess from a thousand miles away is yes, considering there isn’t anything else to take in that store.  Maybe there is looting going on, and the media can get obsessed with the next story of savagery and opportunism after a disaster.  And they can pretend that it’s the residents doing the exploiting (“looters”) and not the insurance companies and real estate developers who can buy up entire blocks for pennies on the dollar (“businessmen”).

This is an easy one- and makes the media bias pretty blatant here.