In David’s blog post on “Disaster Medicine” he talks about the group Herbalists without Borders, a group that is using their skills with medicinal plants to support survivors of disaster. David has also described the Mesquite Community Garden with the Raising the Bridge project in which many herbs are being planted to support the local community’s skills in planting and processing herbal medications from the garden.

A lesson we learned in the development of the Ready-to-Go bike project was that there can be great value in working with existing infrastructure rather than creating a new set of collection and distribution infrastructure from scratch. I wonder if there would be any value in connecting the idea of ‘herbal medicines used in disaster response’ with the idea of the neighborhood cohesion or community networks that we often talk about.

I picture a network of folks who happen to have medicinal plants already growing in their gardens or yards – but who may not know the plant’s value or may be unable to harvest them – being connected with local folks who are willing and knowledgeable about harvesting the plants for use in nearby disaster response.

I picture something like the gleaning associations that exist in a lot of cities across North America, where folks with gardens and fruit trees are connected to people who have the time and ability to harvest and who could use the food.

Here’s a link to the local version of this kind of association in the city of Nanaimo, Canada, where I live: https://nanaimocommunitygardens.ca/gleaning/ 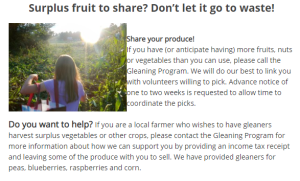