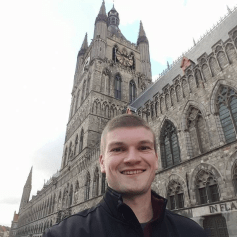 Daniel Snyder is an alumni of Missouri State University where he received his Master’s degree in Public Administration with a cognate in Emergency Management and a certificate in Homeland Security and Defense. Daniel previously received a BS in Print Journalism at Missouri State University, graduating in 2011. After graduation Daniel worked as a news reporter at the Community Free Press for two years covering Springfield City Council, Greene County, State Legislature, and other topics. Prior to working at the Community Free Press, Daniel has also worked as a freelance writer for 417 Magazine, a jewelry salesperson, job coach for a local nonprofit company, and bartender. Currently Daniel is a Business Manager for Ozarks Technical Community College and a suite attendant at Hammons Field, home of the Springfield Cardinals the AA Affiliate of the St. Louis Cardinals. Daniel is also a member of MoCERT 1, a volunteer Greene County Community Emergency Response Team.

Daniel was born in Doylestown, PA (just north of Philadelphia) on July 31, 1988. He moved to Springfield at the age of 18 in 2006 to attend MSU. His father still resides in Pennsylvania and his mother lives in Springfield, MO. He has a 27 year old sister who lives in Philadelphia. Much of his mom’s side of the family lives in Springfield and the surrounding area, thus his reasoning to move here to attend college. Daniel is a rabid Philadelphia Eagles fan and believes they are the greatest team in the NFL, as all other teams are vastly inferior when it comes to their fan-base. Go Eagles! Daniel also enjoys spending time with his family and his 3 year daughter Quinn, painting his rapidly expanding collection of miniatures, reading, learning, listening to all types of music but mostly Led Zeppelin, getting lost in the woods on purpose, hammocks, and being outside whenever possible.